Over the next several decades, many countries oil and gas dependence will grow as their nation’s economy expands. South Korea and Japan (in the upper right counter) are both already highly dependent on energy imports and will continue to remain so in the near future. Meanwhile in Europe, the persistent lack of economic growth is expected to lessen the upward trend in energy imports in the near term.

Developing Asia (China, India, and ASEAN) will see massive growth in oil and gas imports over the next 25 years as displayed by the drastic ‘up and to the left’ movement on the graphic below. One glaring outlier in the world energy picture is the United States —  who is currently undergoing a complete energy transformation due in large part to the break through technology of ‘fracking’. The United States will move from being the world’s largest energy importer to a net energy exporter! 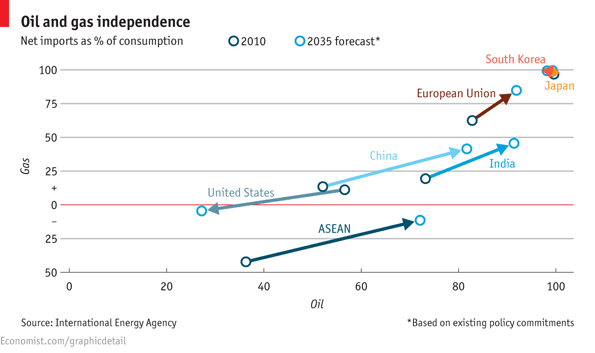