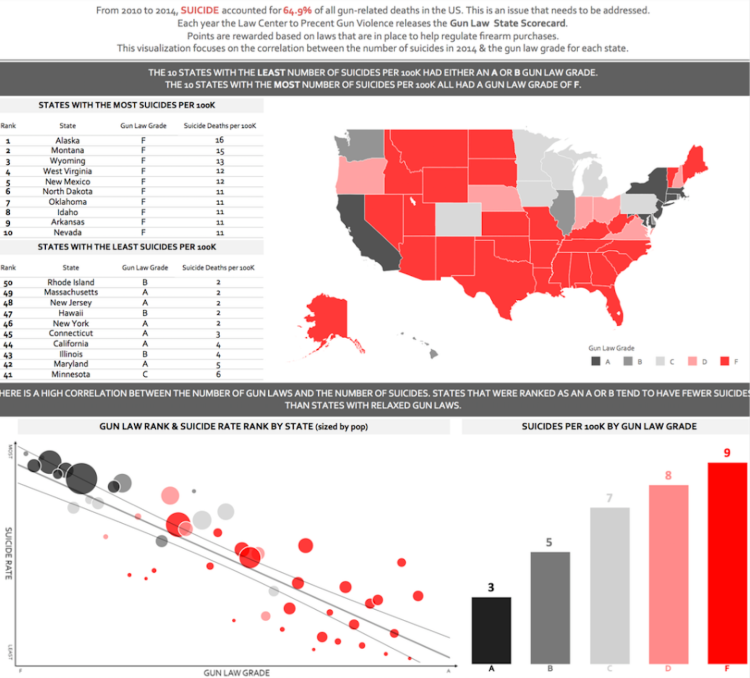 The third presidential debate finished a few days ago and one of the first topics discussed concerned the second amendment, the right to bear arms. Pro-gun advocates claim that more guns make an area safer, while gun regulation advocates claim the opposite. What does data reveal on the topic?

Each year the Law Center to Prevent Gun Violence releases the “Gun Law State Scorecard”. This scorecard grades states from A to F on the laws in place to regulate firearm purchases. Above is a map of the US displaying these grades: An “A” grade is colored black, B dark grey, C light grey, D pink, and F red.

Comparing state grades with the suicide rate reveals some insightful findings. Why compare gun regulations to suicide rates you ask? From 2010 to 2014, suicide was the highest cause of gun related deaths in the US – 64.9% of all gun deaths in the US resulted from suicide. The comparison with gun laws revealed there is a high correlation between the number of gun laws and the number of suicides. States with grade A or B gun laws tended to have the lowest suicides rates per capita. In fact, their is a consistent trend of increasing suicide rates for decreasing gun law grades. Said differently, as gun regulations decrease, suicide rates increase. This increase are not trivial either. The average grade F state has 3 times the number of suicides than the average grade A state.